As a Galaxy Nexus Owner I have been waiting for months for an OTA (over the air) upgrade to the factory installed Firmware (4.0.2). I am finally sick of waiting and complaining to Google (an absolute lost cause).

After some research it turns out that (contrary to popular opinion) not every unlocked Google Nexus actually has the ‘official’ Google Firmware. Some of them have a Samsung variant (WTF !?) of the firmware. Now I really don’t want to get off the technical topic, but I personally think that this means Google is misleading their most loyal customer base. The reason I chose a Nexus device over the (from a hardware perspective) superior HTC One X was the fact that they were supposed to have the official Google Firmware and I did not have to wait forever for bugfixes from the manufacturers.

There are a reportedly several different versions out there. Google’s ‘official’ build for the GSM version of the Galaxy Nexus is named ‘yakju’. Samsung builds ‘yakjusc’, ‘yakjuxw’ and ‘yakjuux’. While they appear mostly the same, only Google’s yakju build is likely to get updates as they happen. Go figure why there was a need for others … :(

or for a more permanent option grab “Android System Info” from the Google Market. 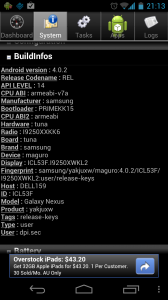 Disclaimer: this procedure obiously has the potential to ‘brick’ your mobile. Only attempt this if you are absolutely comfortable with flashing device firmware. Proceed at your own risk !!! If you decide to proceed – BACKUP YOUR DEVICE FIRST ! Check the documentation for ‘adb backup‘.

The Android SDK can be downloaded from the Androide Site: http://developer.android.com/sdk/index.html)

For all the following procedures to work the device needs to be in ‘Fastboot Mode’
How put your phone in fastboot mode:

You should now see an Android robot with it’s body opened (see photo). 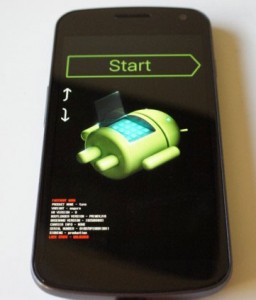 Adding the USB Driver definitions for the Galaxy Nexus

NOTE: This command will erase the whole device. Make sure backups have been taken before (check the ‘adb backup’ tool http://developer.android.com/guide/developing/tools/adb.html).

The ‘factory images’ for Nexus devices can be found here: https://developers.google.com/android/nexus/images – make sure to choose the correct model. The commands below are for the European GSM/HSPDA+ version of 4.0.4 (yakju)

After the last step the handset will reboot and you should be presented with a Google “Stock” device and go through the normal Android setup wizard. As it should have been when I purchased this “Google” branded device in the first place – thank you Google (and of course SAMSUNG) for wasting my time !

If you want to lock your bootloader after the upgrade (not necessary) you can go into Fastboot Mode again and issue the following command:

Dropping the wires on the Raspberry PI